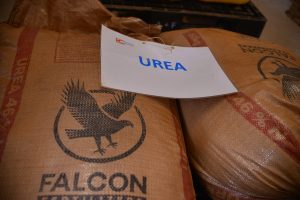 Urea also known as Carbamide, is an organic compound with chemical formula CO(NH2)2. This amide has two –NH2 groups joined by a carbonyl (C=O) functional group.

More than 90% of world industrial production of urea is destined for use as a nitrogen-release fertilizer. Urea has the highest nitrogen content of all solid nitrogenous fertilizers in common use

Urea is a raw material for the manufacture of two main classes of materials: urea-formaldehyde resins and urea-melamine-formaldehyde used in marine plywood.

Urea can be used to make urea nitrate, a high explosive that is used industrially and as part of some improvised explosive devices.

Urea in concentrations up to 10 M is a powerful protein denaturant as it disrupts the noncovalent bonds in the proteins. This property can be exploited to increase the solubility of some proteins. A mixture of urea and choline chloride is used as a deep eutectic solvent (DES), a substance similar to ionic liquid. When used in a deep eutectic solvent, urea does not denature the proteins that are solubilized.

Urea can in principle serve as a hydrogen source for subsequent power generation in fuel cells.

Urea in concentrations up to 8 M can be used to make fixed brain tissue transparent to visible light while still preserving fluorescent signals from labeled cells. This allows for much deeper imaging of neuronal processes than previously obtainable using conventional one photon or two photon confocal microscopes.

Urea-containing creams are used as topical dermatological products to promote rehydration of the skin. Urea 40% is indicated for psoriasis, xerosis, onychomycosis, ichthyosis, eczema, keratosis, keratoderma, corns, and calluses. If covered by an occlusive dressing, 40% urea preparations may also be used for nonsurgical debridement of nails. Urea 40% “dissolves the intercellular matrix” of the nail plate. Only diseased or dystrophic nails are removed, as there is no effect on healthy portions of the nail. This drug (as carbamide peroxide) is also used as an earwax removal aid.

Urea has also been studied as an excipient in Drug-coated Balloon (DCB) coating formulation to enhance local drug delivery to stenotic blood vessels. Urea, when used as an excipient in small doses (~3 μg/mm2) to coat DCB surface was found to form crystals that increase drug transfer without adverse toxic effects on vascular endothelial cells.

Urea labeled with carbon-14 or carbon-13 is used in the urea breath test, which is used to detect the presence of the bacterium Helicobacter pylori (H. pylori) in the stomach and duodenum of humans, associated with peptic ulcers.

Send Us A Quick Email Below

Have a Questions? Call Us On

Visit Our Company at